Thats right friends, I'm sure eveyone reading this blog is oozing with anticipation at the thought that finally, after years and years of shameless teasing, it really does seem as if a proper modern sequel to Elite and Frontier is only perhaps, maybe at best several years from completion.
Luckily for us, the pioneering head of developments and King of Frontier, David Braben has decided to utilise the series massive fan base of massive nerds to attempt to propel this project into solid virtual reality with a well placed Kickstarter to the tender underparts of Frontier Developments.

For the last couple of years i've been sourcing parts and restoring a classic Amiga 1200, the very
machine I received 19 years ago this Christmas.  I used it a lot for more than 5 years and learned some of the basics of digital art that I persue today as something that almost approximates a professional career.  It was also a great games machine and one of the finest titles is easily Frontier, the sequel to the revolutionary 1984 BBC Micro title - Elite.

1993's Frontier was more evolutionary but presented a reasonably realistic (physics working as Sir Isaac Newton would have prefered) and an unbelievably well realised massive galaxy to explore. For a game that will run from floppy disk (remember them?) in 1mb of memory on a computer that operates at 6mhz Frontier was especially impressive, simulating a level of scale from a working clock on a church tower to an entire WORKING solar system to an entire galaxy was something simply unheard of, and in many ways has not been beaten so far.

Needless to say it captivated me in way that no other game ever had, but it was a game that required some imagination to get the best out of it.
So the above, a typical screen, at least in my head, resembled the most fantastic looking space-opera I could imagine, the low res chunky graphics, laughable interface style and bug ridden rendering of low poly spacecraft and environments became a mere framework for a vividly detailed universe.  Ask anyone who played it (and enjoyed it) or its wire-frame 8-bit predecessor and you'll probably get a similar response, it really didn't look like the above at all when you were fully immersed in it.

Years later after the Amiga became obsolete and stopped functioning properly I would still play Frontier (and its sequel FFE) on an x86 PC, occasionally via emulation or modification and reverse engineered code projects with perhaps dubious legal status, enjoying much faster framerates, higher resolutions, better controls and so on, but none actually looked anything like the old Amiga Frontier did in my head, nothing looked as good as in the imagination.

First, is the Asp Explorer... You already saw it at the top of the page, This older project (construction will probably be detailed in a later blog entry - keep em peeled) represented to a degree what the game, or at least what one of the vehicles featured kinda looked like to me - in this case a very battered almost Millenium Falcon-esq cargo ship.

This is how it looked in the original game: 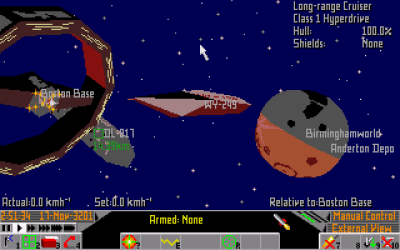 Here are a few more old pics of my interpretation of the original 7-odd triangle model:

I have built several other vehicles based on this Universe, end of part 1, more to come!
Posted by Unknown at 17:21